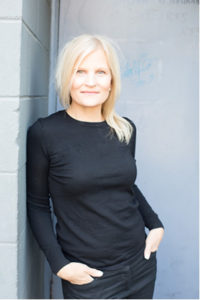 Darcia Parada is an extraordinary combination of a visionary storyteller and a natural leader. In her native Canada, she is an award winning director of live theatre whose unique approach combines cutting-edge directorial decisions, and innovative interpretations of classic works.

Her eclectic work has been acclaimed by the Canadian press. The prestigious Globe and Mail named her a CATALYST ‘ONE OF CANADA’S TOP 10 ARTISTS IN ART & DESIGN” and in 2014 she was honored with the TELUS COURAGE TO INNOVATE THE ARTS AWARD.

Darcia is the Founding and Artistic Director of Mercury Opera — a company that performs all over Canada, and in New York City in site-specific locations to sell out and standing room only crowds.  Known for  re-imagining a venerable art form for new audiences, her concept brings it to the streets – literally – as well as alleyways, railways, tents, circus sideshows, a paddle riverboat, a strip club, a downtown diner, the Badlands Amphitheatre home to the annual Badlands Passion Play, and dozens of other places her imagination conjures.  Audiences describe Parada’s shows as an immersive experience where “you feel part of the action” and “ it’s like being on a film set.” As director her responsibilities range from budgeting and scheduling to casting, hiring crew and promotion.

Heritage Quarters, a short film combining animation derived from an oil painting with soundscape, opera singing and live action was an official selection for the Dream City International Film Festival in Rivne, Ukraine. There it obtained the Festival Director’s special prize. Heritage Quarters has screened several times at Film festivals in the U.K. including the Opera in The City Festival in London in 2018.  In addition to Darcia’s own projects in development, other works in progress include English language feature screenplays for Czech Vilhelm Creative Centre and Optima Film Ukraine.

As a performer she has graced many stages in Europe and North America, and her vocal talents can be heard on soundtracks of numerous film scores and albums released on the Decca and London labels. Her rendition of Puccini’s Un bel di appears as a track on British Disco King Jimmy Sommerville’s compilation record.

When the Internationally renowned Baryshnikov Arts Center in New York City granted her a residency, her competition included hundreds of artists from around the world. It was a great honour and a confirmation of her gifts as a storyteller, artist and director.

Like many who preceded her, including Orson Welles and Mike Nichols, the transition from stage to film has been a natural one.